Now for the exhibition

While I have been drawing my way along this section of the canal it has always been my intention to exhibit some of the sketches somewhere and somehow. Since I have been responding to the tow path during the spring and summer I realised that I wanted to record something about the canal before it is handed over to the developers and the area changes for ever.

During this time I've got to know some of the people who regularly use the tow path and I thought they might find it interesting if I displayed some of the drawings in the same setting in which they were produced so they could be seen as part of a series. I also liked the idea of sharing one of the spaces that are regularly used by graffiti artists.

This led to a protracted period when I was trying to find out who owned the building I wanted to use so that I might get permission from the owner to display my work. This involved getting in touch with the Canal & River Trust who then, in turn, put me in touch with the National Grid who own the building.

Having been granted permission I then had to decide how to reproduce the images and I chose to have them made as small posters. Then I had to work out how to fix them to the wooden doors of the building. I used my test poster above to experiment with and I discovered that glue wouldn't work as the poster simply slid off the door. My staple gun wasn't working so I had to throw that out and then I found the simplest solution was to hammer panel pins into the doors and they have worked very well.

I chose to install the posters last Saturday, 26 September as this marks a year since I began to work on the idea. We had glorious weather and I was joined by my husband and three friends who all supported me while I put the images up on the doors. I will leave them up for the next few weeks assuming that they haven't been ripped off in the mean time. 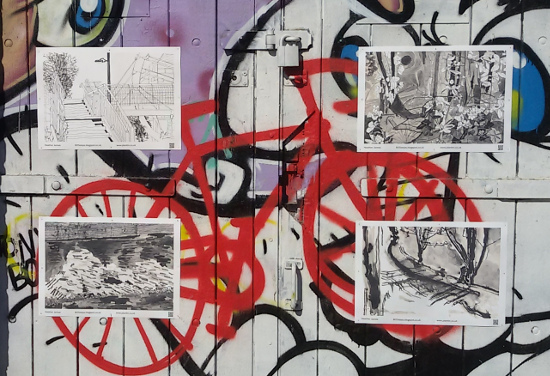