Since my previous drawing ended up being so dark I thought I would try to take this sketch a stage further and make it even more dark. I like the idea of a sketch which is almost entirely black but it would have to make some kind of visual sense. I did this in my previous sketching project and really liked the result.

I had also decided to try using candle wax as a resist to the Indian ink. I didn't take the trouble to try this out at home in my sketchbook before I left the house so I had to experiment as I went along. I found that if the Indian ink was diluted enough the resist worked well and produced some interesting results. If the ink was straight out of the bottle and very black the wax resist was so subtle it was practically invisible.

When I began this series I thought I would be making conventional drawings but as the sketches are stacking up it seems I am venturing into painting. I have been using, amongst other things, a half inch decorating brush which has loosened up my approach. I'm also enjoying using Indian ink which I have learned was being produced in China as early as the middle of the 3rd millennium BC although the source of the materials to make the carbon pigment was later often traded from India, hence its name. 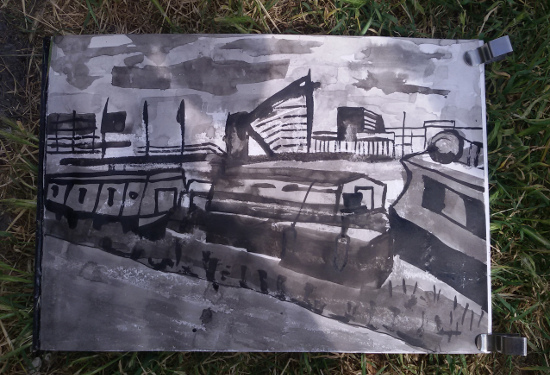